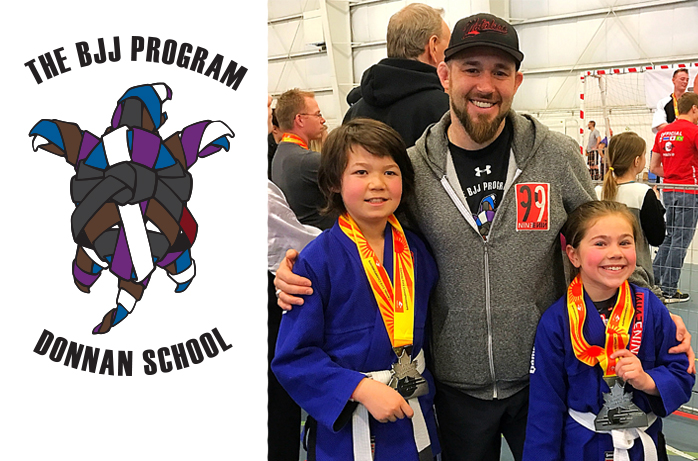 Donnan BJJ student-athletes competed at the Capital City Championships in March which is a provincial level tournament drawing people from all over Alberta to Compete. Donnan student-athletes Brandon Flewwelling (Grade 5) and Willow Mulholland (Grade 3) both earned silver medals in their division! The day was a great learning experience for both BJJ Program student-athletes and another fantastic display of Jiu-Jitsu technique, sportsmanship, and effort!

Here are some highlights from some of their matches with some explanation as to some of the techniques Brandon and Willow were trying to employ.

Brandon (in the blue gi) begins the match defending a single leg take down by his opponent. Brandon was able to pressure his opponent backwards off of another single leg attempt by his opponent causing him to crumble backwards. From here Brandon utilized a guard pass called the “torreando” or “bull fighter” pass to move to knee on belly. The guard pass earned him 3 points and the knee on belly position earned him another 2 putting him up 5-0. Brandon then tried to move to mount but his opponent was able to catch him in 1/2 guard. Brandon immediately knee cuts through 1/2 guard moving directly to mount scoring another 4 points for the mount position. Brandon places his right hand into the collar to set up his collar choke but takes the S-Mount armbar when his opponent defends the choke.

In this video Brandon hits his “A” game tournament strategy. “A” game strategy is something that we practice the week before tournaments asking the students to drill their perfect tournament scenario. This develops pathways and eliminates some of the second guessing that can occur within the competitors minds before matches at tournaments.

Willow played this match really well. She was able to execute her “A” game strategy even with some good defenses from her opponent.
Willow begins the match by pulling guard. Her opponent scores 2 points for a take down because she had a grip on Willow’s leg. From here Willow is looking to attack with a collar choke. Her opponent defends well by sitting back slightly so Willow transitions to a hip bump sweep. The sweep was able to off balance her opponent but Willow didn’t get the sweep because she forgot to trap her arm! This however, opened up her opponents neck and allowed Willow to establish a really deep collar grip with her first hand making her second grip easier to attain and strong enough to get the tap!