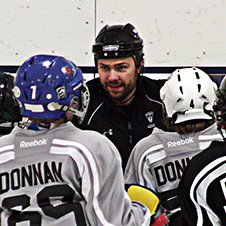 Mr. Stuparyk is currently in his first year as Director of Donnan Hockey and 7th year in the AAD family.

Born and raised in Vermilion, Alberta, Jory played his minor hockey up to Pee Wee in Vermilion before leaving and playing Bantam/Midget AAA in Wainwright.

After playing, he attended Red Deer College for 3 years and received a Degree in Kinesiology. Jory also helped instruct a hockey class in his second year of school before moving on to the University of Alberta. There he graduated with a Bachelor’s Degree in Physical Education with a concentration in coaching theory.

Jory was an assistant coach with Leduc Midget AAA before moving on to the WHL. He is currently in his 7th season as Video Coach with the Edmonton Oil Kings.
Some of his coaching accomplishments are: