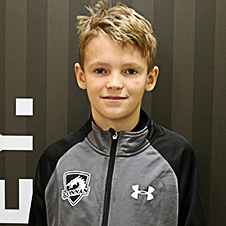 Keenan is a grade 5 hockey student-athlete in his 2nd year at Donnan Hockey.

Keenan is the featured student-athlete because he consistently demonstrates the CORE values of Donnan Hockey on a daily basis.

He is also an accomplished tennis player. Here’s some info on his burgeoning tennis career:

Keenan’s first exposure to racket sports was around 5 years old. He joined a program called vaults and volleys where the kids did half an hour gymnastics and half an hour tennis. At the tennis courts, they start the kids with foam balls, shorter nets and smaller court sizes. They have all sorts of creative games to keep the kids running and giggling. Keenan still enjoys playing a chasing game called pack man to this day.

When Keenan was 7 a coach at the club was wanting to start a competitive program and asked if Keenan and a couple other kids would like to join. He was very excited about doing that and played twice a week starting with orange balls. The orange balls do not bounce as much as regular tennis balls so the kids have more fun and are able to work on their technique. At the end of that season that coach was offered a job as the national girls tennis coach in Toronto.

The club wanted to continue growing the kids competitive program so they hired a coach from the Saville tennis centre. Keenan started training regularly 3 days a week then 4 and now 5 days a week. On days off you can be sure he will be saying “let’s book a court”. He is now transitioning into the U12 category played with regular balls. With that comes tournaments 2 or 3 times a month that run Friday to Sunday in Calgary, Red Deer or Edmonton. Keenan’s proudest achievement so far is a match he played against one of the better players in Alberta. He went to a tie break in the third set and lost 10-8 but played probably his best match up to that point in time. He and his coach have set a goal to make the provincial team within the next couple years. He looks forward to the hard work and the fun he has at training with his friends and coaches.